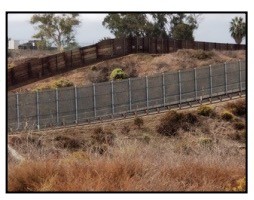 On our last day of vacation in San Diego, Doug and I went to the border between the United States and Mexico. With all the news about immigration, I wanted to see for myself the wall (actually, in San Diego it is more of a fence) between our two countries. We followed the directions on our GPS to the “Friendship Park” between the two countries. We went around several turns and through very rural country. It felt sparse and rugged. It turns out this park is only open on Saturdays and Sundays for limited hours. And the day we went, even then it was closed. It may have been because it had rained the night before (the first time since
February) and there was some minor flooding.

We parked the car and walked about a mile until there were signs telling us we could go no further. In that environment I certainly was not going to push the issue. We could see the fence; fences, in truth: one on the U.S. side, then a space of a hundred feet or so, and then a fence on the Mexican side. We could not get up close to it, but I’m told that the U.S. fence is so tightly woven that people on each side can touch each other only by pressing their pinky fingers together. 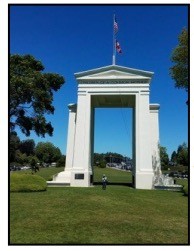 I remembered my experience, just 15 months earlier, at the “Friendship Park” marking the border between the U.S. and Canada. In that case, there is a large park with green grass and a beautiful arch marking the passage between the two countries. Visitors can freely walk through the arch. We noted that in the surrounding neighborhood there were houses on each side of the border, separated only by the street between them.

We did not try to cross over into Mexico. We had forgotten to take our
passports and while our extended driver’s licenses might have been
sufficient, I did not want to risk trouble. Had we chosen to cross the
border we would have had to drive to a place other than the Friendship
Park. Maybe if we had done that we could have seen the fence close
enough to press our pinkies to it.

Fifteen months earlier we had crossed into Canada. In fact, we spent a couple of weeks there. Through the first of those weeks I took some summer school courses. We had taken our passports but all we needed were our driver’s licenses. Passage was simple. People on each side of the border cross openly and freely, sometimes to take a class, sometimes to shop, sometimes to visit friends or see the sights.

I was struck by the difference between the two borders. Of course, they are
about 1400 miles apart and in very different terrain. The southern border is
desert or near desert country. The northern border is more verdant. Regardless
of the political situation, the borders would vary significantly.

Two Friendship Parks. One felt very friendly. The other not so much. As we left
the southern border, Doug and I felt somber, reflective, even sad.

I see why we need clear borders between countries. I see why a totally porous
border is inappropriate. And I wish the southern border felt more like the
northern border. I wish we could really be friends.